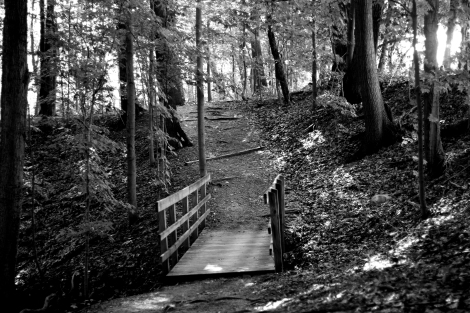 “There is pleasure in the pathless woods, there is rapture in the lonely shore, there is society where none intrudes, by the deep sea, and music in its roar; I love not Man the less, but Nature more.”

Ohio, with all of its faults, has some of the best scenery in the U.S. Its transition from season to season holds a bit of magic that I have not yet seen in the other places that I’ve lived. Sometimes it leaves me breathless.

To celebrate Summit Metro Parks‘ 52nd annual Fall Hiking Spree, I decided to start a series highlighting some of my favorite trails in the area. This Hiking Spree is the longest running event of its kind in the nation. Participants complete eight of the designated hiking trails with various difficulty levels between September 1st and November 30th. Upon completion, you receive a hiking stick and shield.

This particular trail is on the border of Akron and Cuyahoga Falls. I actually hiked it two days before the event started, so it’s not going to be counted amongst my eight unless I hike it again.

I tend to like to get away from people from time to time and connect with something larger than myself. Nature has always been the one thing that I sought out to give me balance and perspective. It makes me look at the big picture and realize that those moments when my anxiety is at its height are just that, moments. They are fleeting and should not be all-consuming or define me. It’s quite humbling.

I picked this trail because it was a new one for me. It was a fairly quick (1.2 miles) and took me in a loop. I’d say it probably lasted an hour (I stopped to take photos often), but could have lasted a lot longer if I had have taken its connection to the Sand Run Metro Park.

Overall, it was beautiful and had a lot of clearings on cliff edges to see down into the valley that was sprinkled with the leftovers of a river and mighty fallen trees. On the Summit Metro Parks’ scale, it’s a level 3 due to its hilly nature, but a C (Basic) Class because it’s not a primitive trail.