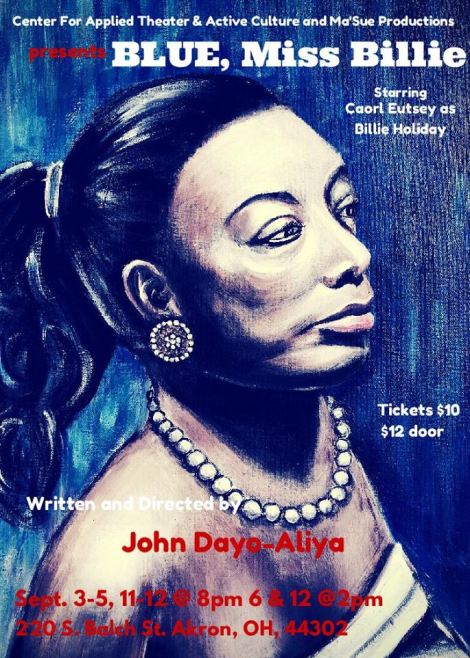 Saturday, September 5th, I had the pleasure of attending John Dayo-Aliya’s newest play at the Balch Street Theatre. BLUE, Miss Billie is a compelling story about one of the most influential yet tortured jazz singers to ever grace the stage. Billie Holiday spent her life battling her demons, bad relationships, and a drug and alcohol addiction that eventually led to her death in 1959.

By interweaving two timelines through the character Fred, a journalist obsessed with Holiday, Dayo-Aliya creates a narrative that plays with this idea of sacrificing ones self for their art and how that affects their relationships with those around them. Each of the eight cast members had a specific purpose that moved the story along. Caorl Eutsey, who played Billie, beautifully moved the audience through scenes that were tough to swallow.

I enjoyed the way the set was not just contained to the stage. It helped bring the audience into the story and made us more than just spectators. Dayo-Aliya continues to effectively hit the mark when it comes to meeting Ma’Sue’s mission of exploring and celebrating the African American experience.

You still have a chance to catch the play before it’s gone. There are three more show times, Friday, September 11th at 8pm and Saturday, September 12th at 2pm and 8pm. Balch Street Theatre is located at 220 S. Balch St. Akron, OH 44302. Tickets are $10 in advance and $12 at the door. Find out more here.