This year, I kicked off the first weekend of the new year right. I dropped by Canton for their 3rd Annual Froth Fest which coincided with their First Friday events. That means beer, art, music, and ice sculptors. The event was family friendly from 4-9 pm and it got more “adult” after 9.

I didn’t make it there until about 9:30pm and it was freezing. I wore 2 coats, knee-high boots, a scarf, gloves, and earmuffs and I was still cold.  Luckily, I found a heater later on or I probably would have had popsicles for extremities. Some people had fires going on the corners. I was on the verge of joining them.

Before hanging out at Buzzbin, I wandered the art district checking out the ice sculptures. I think my favorite would have to be the goat. Those horns were awesome. I’m kind of sad that I missed the fire ice tower but I knew I was going to be out late, so I didn’t want to come too early.

I had never been that far into Canton before even though it is less than half an hour away. I definitely plan to go back and check out the galleries. Buzzbin Art & Music Shop is run by a guy named Mike who loves art, music, and beer. That place is really cool. The walls are covered with art from various artists (There’s a piece on the wall at the corner of the bar and sitting area in the main room that I think you should check out).

There’s a stage to one side, a bar on the other and various places to sit. I love the vibe of the place. From what I can tell, a very eclectic group of people come there to hang out. And, they have this drink called the Caramel Apple. It’s so good and tastes just like its name. I would go back just for the drink. 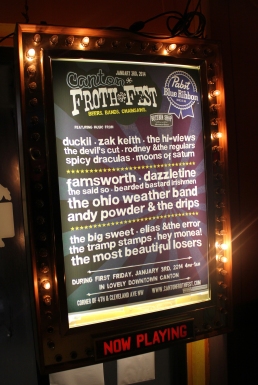 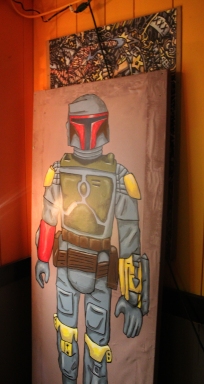 In addition to checking out some bands I’d never heard of, I got to watch The Ohio Weather Band. You may remember them from a post a few months back. I’ve stayed in touch with Corey (the lead singer) and found out that their album is almost ready to be released. I’m so excited!

They put on a very good show and this time I knew a lot of their songs. If you haven’t heard of them, I would definitely suggesting checking out their band camp page.

It was a great night with art, drinks, and friends. I hope to do it again soon.