Well, I’m back with another health, strength and flexibility update. I skipped last month because there wasn’t really anything to show. But I’m happy to say that I’ve seen quite a bit of progress from February until now. From the photo above, you can see that my abs are coming along nicely and my ribs are visible. I’ve also lost about half a cup size which helps with button-up shirts. The muscles in my arms are slowly but surely making themselves visible. I’m down to a 26″ waist, 30″* abdomen, and 37″ hips. I am now hovering between 140lbs and 142.2lbs so in the last few months I’ve lost about 10-15lbs and 63-68lbs overall. I don’t plan on losing anymore weight. I’m shifting my focus to maintenance and increasing strength at this point.

The last two weeks I’ve been doing the Sexy Shred Challenge created by Feminista Jones. This 4-week challenge focuses around clean eating and working out at least four days a week. I found out that I’ve been pretty much adhering to the challenge’s rules already. The only things I’ve had to cut from my diet were the sweets that I ate every now and again, lattes/mochas, sugar in my tea, and the small amount of butter I used. It hasn’t been a huge transition and I haven’t had any withdrawal symptoms. I did have to add in another day of working out, so I started running about two miles once a week in addition to yoga once a week and my standard two days of weight lifting.

When it comes to weight lifting, I didn’t want to increase my weights too quickly because before the challenge started I hadn’t been for two weeks. Today, I was able to increase my weight and I’m attempting to add in chin-ups and deadlifts to my routine. I can almost squat my own weight which is kind of cool. I’m also slowly increasing my bench press strength. I can bench press an average 12-13 year old. Squats, bench press, lunges, arm curls, push ups and leg press are my base exercises. Of course I separate them by upper body day and lower body day. I end up throwing in other exercises but it isn’t always consistent. One week I might do preacher curls and the next I might do lat pull downs. I do that so I won’t get bored.

I’ve been going to yoga once a week and that has been helping with my flexibility. I also try to get in a couple short sessions when I can throughout the week. I want to be able to do a forearm stand, Scorpion pose, and Crow pose by June. Hopefully, I can get there.

Well, here are the comparison pictures. If you want to see what I looked like before my health journey then check out this post. 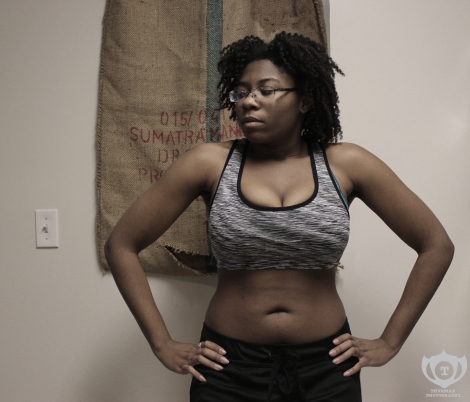 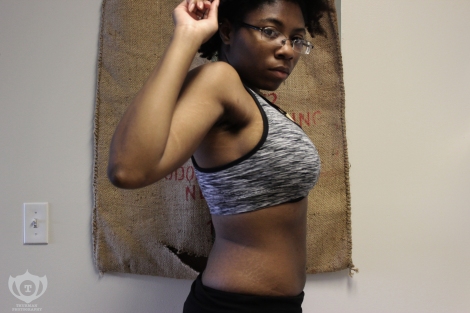 I want people to know that I document my journey because I want to motivate others to get up and get moving. Working out and eating right helps you live longer, improves your mood, and relieves stress. Happiness starts from within!