The Electric Pressure Cooker, EPCooker as it is affectionately referred to, is a monthly “anything goes” open mic created by the Wandering Aesthetics Theatre led by Benjamin Rexroad and his husband, Kyle Jozsa. It’s a safe place where all manner of comedians, writers, musicians, and misfits join together for a night of fun, drinks, and laughter.

Due to its increasing popularity it outgrew its old location at Every Blooming Thing and has begun having it in the None Too Fragile Theatre at Pub Bricco. But even Pub Bricco was packed to the brim. I wouldn’t hesitate to say that 100 people or more flowed in and out.

This month’s event had the theme “We’re All Mad Here” and if you haven’t caught on, I’m quite the “Alice in Wonderland” fan. It was perfectly suited for this blog and I loved how the emcee for the night was dressed as the Cheshire Cat. 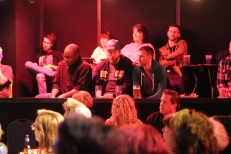 There were a few favorites for me throughout the night.

The Sons of Midori became a Led Zeppelin (?) cover band for a night and they rocked it. Look at those hats. 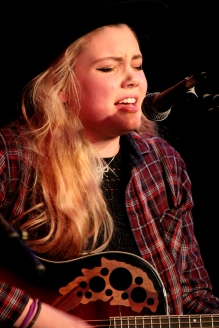 Samantha Grace and Aaron killed it. They were easily my favorite musical act of the night. Samantha has such a strong voice and she covered Amy Winehouse’s “Back to Black” amazingly. I’ll have to check out some of her future shows.

Willis Gordon is an amazingly talented comedian. The material just rolls off of him and he seems wise beyond his years. I also really enjoyed his FB bio: “Willis Gordon is a Lost Highwayman, part pirate, part patriot, a wandering artist whom life has turned into an accidental iconoclast. Born and raised in Canton, Ohio, Gordon is an Acclaimed Author, Powerful Essayist, Controversial Columnist, Master Orator, Stand Up Comedian, Musician, Actor, Boxer, and Veteran of the War on Terror. His prose captures the essence of the great American writers while still maintaining a timelessly fresh quality in his work.”

I’d have to agree with every word.

Marcus Calvert read the first chapter of one of his book and it really enticed me to find out more. You can find out where to snag a copy here.

Last, but certainly not least, Kyle Jozsa’s storytelling abilities are phenomenal. He knows how to draw the crowd in. I’ve heard him a couple of other times and he never fails to evoke a chill from me with his haunting Appalachian stories. 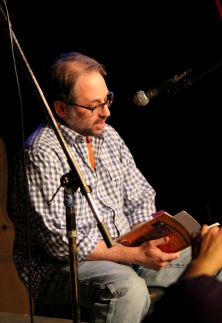 Here’s also a short video from the show.

This area is so phenomenally talented. The creative scene has been on the rise for the last couple of years and I don’t see it stopping any time soon.

If you haven’t been to an EPCooker yet, I’d really suggest you check it out. The next open mic will be April 11th. You can find out more at the Wandering Aesthetics’ page.

Thanks everyone for reading,

One response to “The Electric Pressure Cooker”