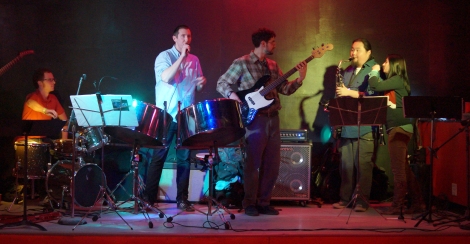 A couple of weekends ago, I went to go check out Copali at The Vortex in the Goodyear Heights area. I ended up not staying for the full show, but I know they opened for a couple of local metal bands.

I thought that was funny because they are not metal in the slightest. In fact, Copali is an Instrumental Jazz/Fusion band composed of Blaine Klein (Steel Pans), Willow DiGiacomo (Clarinet/Flute), Lucas Rich (Tenor Saxophone), Cameron Weichman (Drumset), Charles Klein (Bass), and Mike Langman (Guitar).

Blaine attempted to interact with the crowd by getting off the stage and dancing. I enjoyed his attempt. It kept the set very light and fun. I believe my favorite song that was played was Charles’ Jam. It was funky and fun bringing in other members slowly to form a complete sound towards the end.

As their set ended, I heard quite a bit of the crowd say appreciative things about the band. I thought that it was great that people who you wouldn’t think would normally like that genre of music to enjoy it. Good music seems to be a common ground in a world that tries to divide.

*I was able to receive a copy of their demo. I may end up adding more about my thoughts on this band in the future.*