Today, to complete my “Hiker’s Choice” for the Summit Metro Parks Fall Hiking Spree, I returned to an old favorite: The Gorge. I’ve completed two of the eight trails thus far, and I have a little over three weeks left to wrap up the last six before the spree is over. Instead of tackling the Gorge Trail, I decided to take a route that I’ve never done before: Glens Trail. This winding, rocky trail takes hikers along the Cuyahoga River and up towards Front Street by Triad Advertising before having you turn back around, which provides an equally stunning view of the path you just trekked.

The trail is listed at 1.8 miles, similar to the Gorge Trail, and is rated strenuous with a mixed class of accessible, basic, and primitive. Personally, I wouldn’t say that this is the most accessible trail. It’s incredibly rocky, with many thin sections of the trail possibly proving a challenge for those who are not steady on their feet. You do get some spectacular views of the river along the way, as well as the natural ledges with flowing springs. It is hands down one of the most beautiful trails that I’ve had the privilege of exploring in the area. The Gorge has always been one of my favorite metro parks because of its variety of views. This is an area with a very obvious Native American history, especially around the Mary Campbell Cave area on the Gorge Trail. The ledges add a lot of texture and visual appeal to the trail, and the narrow turns and paths upward challenge me to push myself more. I’m someone with a pretty significant fear of heights, but I force myself to face that fear every time I go climbing in a place like this. It makes me feel like I’ve accomplished more than when I stick to easier paths.

The Gorge is beautiful year-round, but this time of year is especially breathtaking. As you can see from many of the photos, the gold of the trees, the river, the way the ledges jut out in angles create an image that is hard to forget. It reminds me that this kind of beauty takes a long time to create. We tend to see the here and now, but forget that it took thousands of years to establish something as beautiful. The same is true about life, the work that I do in my community, and the art I create. It takes time to build something beautiful, but the journey can be just as fulfilling. We are all a work in progress. I’m going to try to carry this thinking through the end of the year and into the next. In this constant quest for self-improvement, I’m going to make mistakes. I’m going to slip up, but I have to make sure to brush myself off and try again. I cringe at things I’ve done or said in the past, but that cringing reminds me that I’m learning from those mistakes and just need to keep moving forward towards a better me. 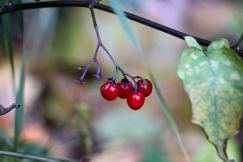 And then it all comes down... #iphone
First Bloom... #canon80d
Factory Settings. // #cycle #ride #socialdistancing #akron #towpath #whynotakron
Raizo & I love this piece that my @akroncoffeeroasters family gifted me for my 30th birthday. I couldn’t have asked for a better crew. Love you guys. // #chosenfamily #akroncoffeeroasters #art #friends
So, in a state of spiraling anxiety over the weekend, I bought some skincare and makeup from @glossier. It came today and I decided to try it out. I’m using their cleanser, oil serum (on top of my regular toner and moisturizer), eyebrow filler and pomade, eyeliner, and matte lipstick. No, I will not become a makeup/skincare reviewer but I wanted to give a reason why y’all are seeing my face once again on this page.// #glossier #bioshock
The child lives!!!! // I made my first sourdough loaf with a starter that I created a week ago. 🙌🏾 #canon #baking #sourdough #food #eat #foodphotography #photography #bread #isolationcreation