Well, here we are. Tea Time with the Mad Artist is about four years old now and has matured beyond my wildest imagination. It went from a cathartic release for my chaotic, artistic mind to a way of sharing my love of an area and its music. Today, it’s still my baby, birthed from a formless idea and sprouted legs. Because of this blog I received so many opportunities that I may not ever have had. Because of this blog I became more confident, more curious, more involved. This is hands down one of the most catalytic components of who I am and who I will become. So, thank you to those who have stuck by me through every iteration. Thank you for putting up with not posting as regularly, the times when I had less to say, the moments of searching. Thank you.

2017 is going to be a different year, in more ways than one. But this year I’m focusing more on my passion projects, my art. I hope to get back to the concerts, the photography, the exploration with showcasing. I miss it. I’ve done so much in this last year since changing career paths and I’m more involved than I’ve ever been, but I haven’t shown you all the city I love from my own eyes in a very long time. So, I’m bringing Northeast Ohio, particularly Akron, back to the blog. 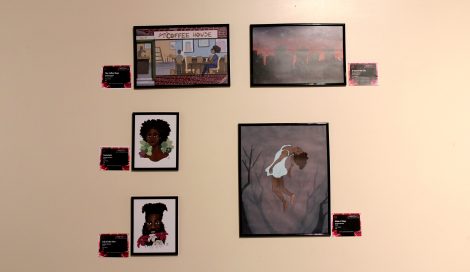 To kick it off, I guess I’ll start with the now. I just completed my first art show of the year. The Cue Brand reached out during the end of 2016 and I accepted the offer to be a part of this show. I had no clue what I was stepping into, but I knew I would be producing all new pieces. So, I went to work. I ended up hammering out a few pieces well before the show, but the week of, I was scrambling for the last few. I ended up scrapping one entirely and recreating it the day before. That was surprisingly one of the best decisions I could’ve made. Personally, I think the people at C.O.S. Blueprint, a small printing company in North Hill, got tired of seeing my face every day that week.

Anyway, Immersion was an art show, concert, party that brought together people from all walks of life. Several of the artists involved were from the University of Akron’s Myer’s School of Art, others were trained at art colleges like SCAD, and some were self-taught. The styles ranged from digital to airbursh to painting to experimental. My personal favorites were the colored pencil pieces (seen above) by Derin Fletcher. The level of detail blew me away and they drew your eye immediately due to the vibrant background colors.

Like I mentioned earlier, the show was packed. Approximately 50 to 75 people filled the space throughout the night and the music ranged from R&B to Hip-Hop.  Jovan Wilder kicked off the night, replacing a last minute dropout. I had heard him play once before at Jilly’s a year or so back with his previous band, Jovan and the Wild Things. He’s incredibly talented and has the ability to hop on stage and rock with any song. During the intermission after his set, he led the crowd in a song and it kept the energy up. I’d like to hear more from him in the future.

Luv Abstract, an Akron indie artist, performed next and to be honest, I was not impressed at the event. The songs he chose to rap over were raunchy. It threw off the vibe of the night. I did some more digging and took the time out to listen to his Soundcloud.  It’s completely different than what I heard at the show and I love it! The songs on his Soundcloud are fresh and unique. They were definitely something I could get behind and rock with. I’m not sure why he chose to rap that night, but it was a bad call because he lost a lot of the audience.

Her & Them, an eclectic Akron band,  finished off the evening covering some favorites ranging from Erykah Badu’s Tyrone to Mark Ronson & Bruno Mars’ Uptown Funk. Sharonda, the singer, has a stunning voice that can captivate a crowd. I would love to hear some original music from them at some point in time. I’ll keep my eye on this band for original work.

Overall the night was incredibly successful in terms of people and introducing them to new experiences. I was happy to be a part of something that generated such interest and a merging of diverse groups. Due to my job, I’m learning how important it is to have these kinds of interactions in a city. Akron needs more cool, different, inclusive events to keep the momentum alive. Lastly, I want to give a shout out to Nyki Fetterman for curating the show and The Cue Brand (Will Blake) for being such a topnotch group. The quality of their work shows how important this means to them and how much they love the city. We need to start and continue to support organizations like them.

Thank you for reading,