Located on North Main St. next to the widely known Luigi’s, stands a music venue. Jilly’s Music Room is unlike many of the other venues I frequent. It caters to an older crowd with a more “adult” decor, a nice looking bar, and a pretty awesome menu. I’ve been there several times for Dr. Sketchy’s Life Drawing sessions, but this is the first time I actually went for music.

I have to say that this is an impressive line up.

Acid Cats started the evening off with their acidic jazz rock. You may have heard this name before on the blog. Most notably at Froth Fest earlier this year and Square Fest last year. For those of you that do not know, they are an Akron-based band that not only puts interesting spins on covers, but also has a lot of great originals.

They will be releasing their second album, “All in a Days Work” this Spring. You can catch them live at Happy Dog in Euclid Tavern on April 15th.

Scarlet & The Harlots are a Kent, OH blues rock band led by the dynamic vocals and sassy stage presence of Scarlet. I was blown away by their sound. It’s gritty, but soulful and you can tell that they’re all seasoned musicians.

Together they have two albums under their belt. The most recent being We Can’t Seem To Get Enough. By the time they covered a hit from The Rocky Horror Picture Show, I was sold as a fan for life.

They will be playing again on April 12th at Mr. Smalls Theater in Pittsburgh, PA.

Jovan Wilder & The Wild Things were the headlining act for the evening. They’re an Akron-based band that taps into a multitude of genres. This includes, but is not limited to R&B, soul, rock, and funk. Jovan has a really great voice and awesome stage presence. He really knows how to captivate the room. 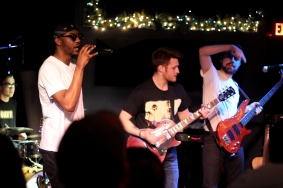 Overall, it was a great time and I was able to add a couple more bands to some of my local favorites list.