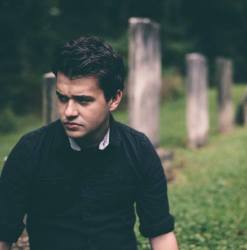 Title: Somewhere You’d Rather Be

This review has been a long time coming. Earlier this year, I went to Cody J. Martin’s album release having never heard any of his music. I originally went because The Ohio Weather Band was playing, but I immediately became captivated by Cody’s vivid storytelling and emotive voice. Ever since then, I’ve tried to get out to more of his shows because he’s just great live.

Cody J. Martin is a 20-something-year-old, singer/songwriter out of Massillon, OH and this is his debut album. I had the pleasure of first meeting him the week before his album release and he’s incredibly nice.

“Somewhere You’d Rather Be” has been one of my go-to albums for the last several months. Its 12-tracks flow right into one another giving the listener a sense of a story being played out before them. As I’ve said in previous posts, Cody has a real knack for creating beautifully woven imagery that leaves you feeling something.

There’s a mix of fast and slow songs, but they all feel overwhelmingly melancholy. Reminiscent of the old blues albums, this is not one that you would listen to if you needed a pick-me-up. He touches on a range of topics including, but not limited to; love, loss, and pain. In a way, he tells listeners that the path through life is a rocky mess and sometimes there are more downs than ups.

My favorite song would have to be “Lies for the Precious Kind” because it has such awesome lyrics. I’m not going to quote the entire song (although I want to), but a piece of it goes “Will burn away my haunted memories with the flame inside your soul as you watch its blackened smoke lead me away.” If that isn’t a sweet set of lines, then I don’t know what is. This is also one of his faster songs and seeing him actually play the guitar so quickly is envy-inducing.

My second favorite would have to be “All Roads Lead to War.” It’s also a faster song with a great harmonica section. I think I’ve mentioned this before, but I think that the harmonica is an awesome instrument. I don’t have the wind or musical capabilities for it, so I’m quite jealous of anyone who can play it.

There’s so many lines I can pull from, but here’s a few of my favorites:

“And by the shade,
This mask of love hides a scheming face” (“No Shadows”)

I find it interesting that he ended the album with the title track. Off hand I can’t think of any artists that have done that, but it was a good choice. In my opinion, it’s the one song that gives a complete overview of the entire feeling of the album and wraps it all up nicely.

On the more technical side, I noticed that there’s a slight echo throughout the albums entirety, but I really like it. It makes it feel more natural. I’m not a huge fan of the perfectly polished sound. To me, music is alive and it doesn’t need to be perfect. I also liked how he added little things that made it different. For example, there were bells and people chatting towards the end of “No Shadows.” Initially, I didn’t notice that. It wasn’t until I listened to it for this review that I caught it and I had to replay it to make sure I wasn’t hearing things.

Overall, this is a great album and compelling story that you can relax to. I find myself writing to it often. It isn’t perfect, but honestly it doesn’t need to be.

One response to “Album Review: Somewhere You’d Rather Be”