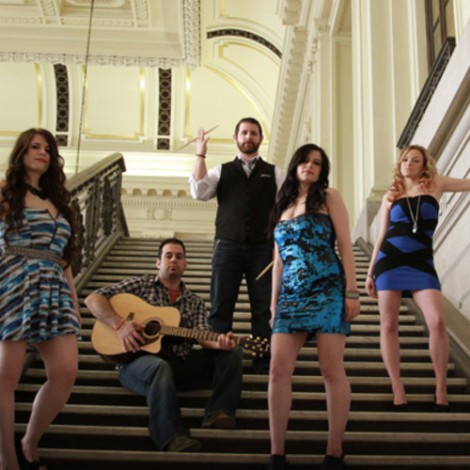 Recently, I was contacted by the manager of a New Jersey band named Spinn. She wanted me to check out the group’s EP and I was happy to do so.

Before I get to the review, I’ll give you guys a little more information about the band. Spinn was formed in 2006 and appears to have two albums under its belt. It’s composed of singer-songwriter twins, Stephanie and Cheryl Lynn Spinner, singer, Megan Battaglia and are backed by guitarists, Steve DeSteno and Eddie Rossman. They describe themselves as an Alternative Country band that draw from pop and rock in addition to country.

Their newest EP “City Country” is composed of three songs; the title track and newest single, “Country City,” “The Bank Robbery Song,” and “A Little Crazy.”

“Country City,” is an upbeat song that tells listeners that being country isn’t about where you were raised. It’s evident in the chorus. “I’ll rock these cowboy from Jersey all the way to Tennessee/Those dusty roads and big bad trucks they don’t scare me” and “I’m all fired up, ready and able to drink those whiskey boys right under the table.” I can see this doing well on mainstream radio stations and a musical drama television show targeting women (think Nashville).

“The Bank Robbery Song” was my least favorite song of the three. It doesn’t scream Country to me and way too poppy for my tastes.

“A Little Crazy” would have to be my favorite from their EP. It’s less poppy than the other two and reminds me most of the Dixie Chicks. My favorite line from this song would have to be, “Forget what’s logical/Oh this rush is worth the fall.”

Overall, I think that there’s no doubt that these girls can sing. The three-part harmony blends very well and the overall sound is very polished. But in my opinion if they want to really tap into the Country market, then they’ll have to cut down a bit of the pop. It’s very hard for bands to cross genres successfully, but it’s possible.

You can find their latest single here and the rest of their EP here. If this review has really piqued your interest, then you can check them out live at their NYC release event on Saturday, June 7th at The Bitter End at 7pm (147 Bleecker St).