A couple of weeks ago, I hit the highway and went down to Canton for their annual two-day Taste of Canton event. I searched the area looking for some of the best foods, so you don’t have to. In the end, I could only try 6 places because I have a limited capacity in my stomach, but I did end up taking tons of photos.

The first place I stopped at was Loby’s Grille. I tried their fish tacos and chicken sliders. The fish taco was really good. I’m not exactly sure what kind of sauce was used (I normally hate sauces), but I didn’t mind it at all. The fish was fried so it had a nice crunch when you bit into it. The chicken slider looked like it had a vinaigrette on it and I tasted a hint of vinegar. t was an interesting blend of flavors, but enjoyable. Next time no mayo though.

Danny Boy’s Pizza was a must try since it’s award-winning and all (They have a few locations across Northeast Ohio). I really liked it. The crust was nice and crispy everywhere but the inside of the edge. It was on the thinner side, but it was seasoned well so that made up for it in my mind.

After Danny Boy’s, I decided to move in a different direction and try Kabab & Curry. It’s an Indian restaurant that gave you samples of all of their items they had available. My favorite was the chickpeas and the chicken. You can taste the curry season in it and they weren’t really spicy. The vegetables weren’t really my cup of tea on their own (there was a pungent flavor to them), but when mixed with the sauce from the other times they were alright.

I took a bit of a break to settle my stomach and wander around. A stage was set up on one side where musicians provided everyone with music while they ate. It was a pretty packed scene although it was later in the day. 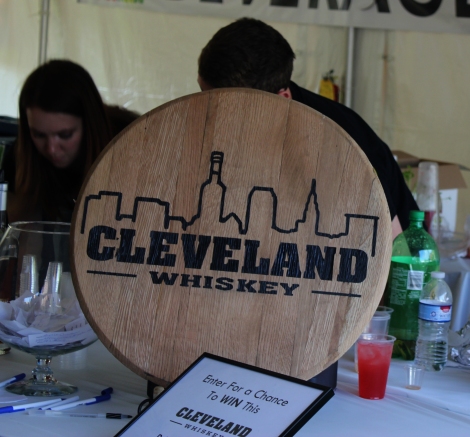 Because I’m a bit of a whiskey lover, I had to try Cleveland Whiskey. I had a shot of “The 87” and the 100 proof and then got the Mojito. “The 87” has a bit of a bite to it, but goes down relatively smooth. The 100 is pretty strong, but still smooth. I recently found in my email that they sent me the recipe for the Mojito, so I’ll be trying that out soon. 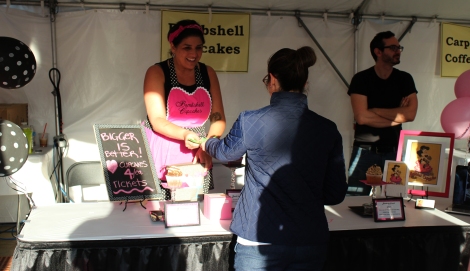 Bombshell Cupcakes is definitely going to get my business sometime soon (It looks like they do not have their own shop right now, but do sell at Cheese Louise). I got the Blueberry Walnut Maple Cupcake and it was so good. I’m not a huge fan of the filling on the inside, but I can eat around it if I must. I hope they have cupcakes without filling. That would make my day.

Lucca had been one that I’d been looking at the entire time I was there, but I wasn’t sure I wanted to get anything. This is a restaurant that is going to be a bit on the pricier side, if you go there. I checked out their website and saw they use locally sourced ingredients which is always a major plus for me.

I ended up getting the bruchetta. The standard tomato-basil one was really good. There was a nice balance of flavors that I enjoyed. The one with the mushrooms and ricotta wasn’t really for me. It had too strong of a vinegar flavor.

I wrapped it all up with some Almost Heaven Homemade Ice cream. I got the cookie dough flavor and it was quite taste. It was the perfect ending to my evening of food.

Here are a few more random photos I took:

Thanks for reading! I appreciate all of you who take out the time to check out my blog.