A couple of weeks ago, a coworker/friend and I decided to visit Saffron Patch in the valley area of Akron, OH. She had been telling me about this place for a while now and on one of our off day, I agreed to meet up with her.

Although, the place is small, it is quite beautiful and fills up quickly. We made sure to make a reservation. The area was painted in earth tones with Indian art adorning the walls. There was one at the doorway that captivated my attention as we were leaving and I forgot to grab a picture of it.

We started off the meal with mangotinis. These were strong, but extremely tasty. Our waiter brought out this stuff that I’m still trying to figure out. They were sheets of something that tasted starchy. They had this strong flavor that was on the border of unpleasant. I found myself trying more of it because I was trying to pin point the flavor. It wasn’t overwhelmingly disgusting but definitely different.

For our main meal, we shared some Kashmiri Naan and I ordered the Chicken Vindaloo while Erin ordered the Malai Kofta. The Naan was very sweet. It was made with coconut, almonds, cherries, raisins, and cashews. The cherries gave it that pretty color on the inside.

My Chicken Vindaloo was very spicy. I told them about a 3 on the 1-5 scale. The chicken was tender and they threw in chunky potatoes in with the onion, tomato sauce. It was warm, filling, and delicious. I think that the next time I’ll try what Erin had. It was actually off of the vegetarian list. Anyway, check out the photos below. 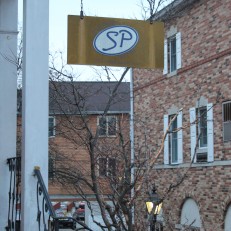 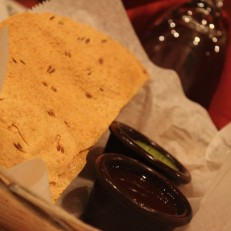 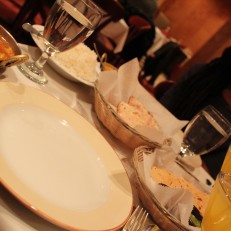 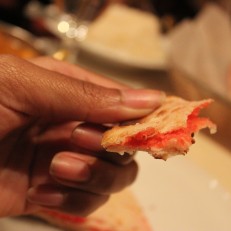 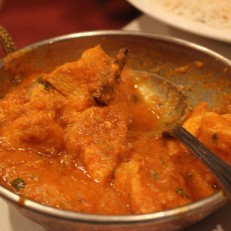