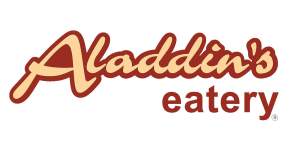 I think Aladdin’s is a new traditional spot for me and my coworkers to go eat at. On two separate occasions, I went there with coworkers. It’s a Lebanese restaurant that gives you a nice quantity for your money. It’s nice and cozy in the Highland Square area, but I know there are a few that are located in Indiana, North Carolina, Virginia, Pennsylvania, but are focused all over Ohio.

I’ve walked by this place several times and it was packed. I was lucky to not have to deal with the crowds that normally surround this place. Everyone I’ve talked to who have had it said that it has great food and I would have to agree from my experiences.

The couple of times that I’ve had their food, I got the same thing. I got the Chicken Sambusek. It’s a pita pie that is filled with curried chicken, onions, peas, and is covered with tomatoes and scallions. It’s quite flavorful although a bit dry. You need to drink something with it because I don’t believe making the filling “wetter” would work well with the pita. Their smoothies are great! The first time I went, Jen and I had to grab it to go and the smoothies were still frozen when we came to pick it up. I was pleasantly surprised. Most smoothies start to liquefy quickly.

If you’re ever near one and want to try something new, yet flavorful, I would suggest stopping by. I don’t have anything bad to say about it.