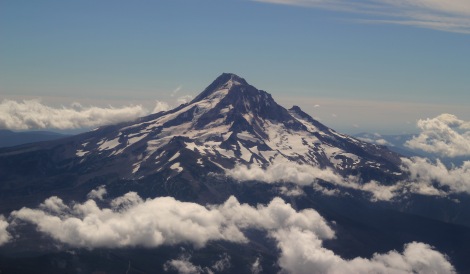 This past holiday weekend, I took a trip to visit my good friend, Erin, and my friend, Nicole, out in Portland, Oregon. I’ve been on plenty of plane rides in my day, but I’ve never flown alone. I was a little nervous at first, but once I got past security and reached my gate, it was a breeze.

Erin informed me that I would want a window seat and she was right. The photos above were what greeted me as I reached Portland. The one at the very top is of Mt. Hood.

Over the course of 5 days and 4 nights, I ate, drank, and went on tons of adventures. I’m not going to bog down this post with the full play-by-play, but I will highlight bits about the city, the restaurants I went to, and the mountain hike.

I spent quite a bit of time wandering around the city. Erin and I took the metro (train & buses) quite a bit instead of driving. This was especially true when we went out drinking or clubbing at night. They actually have a movie theater that refuses to allow minors in after a certain time. How cool is that? 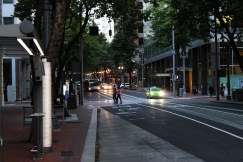 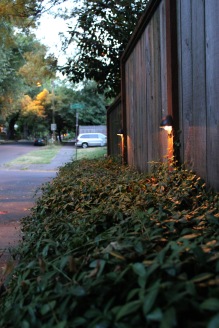 A few things I noticed about Portland was how locally focused everything is. You see tons of local businesses and gardens. It gives off a very liberal, hippie/hipster vibe with the enjoyment of life being a big part of it all. There is no end of things to do and see. I loved it.

I’ve never hiked a mountain before. I had no real idea what to expect, but I was up for pretty much anything. It was one of the most amazing experiences I’ve ever had. The trees reached for the sky in a seemingly never-ending path. Fog surrounded us and the changing altitude took my breath away. I felt so at peace out there and even with the little bit of an issue during the middle of the hike, it was a probably one of the best things I’ve ever done.

There really is nothing like hiking. Nature is so awe-inspiring, so beautiful. You can really get lost in its magnificence.

I can’t rave enough about the food there. Everything tastes fresh and flavorful. I was pretty much in my palate home out there. I didn’t have a single bad experience food-wise.

A few hours after I got off the plane, Erin and I went out to Sushi Ichiban. I’m a massive lover of sushi, so this was the perfect way for me to start off my trip meal-wise. I was amazed by the sushi train they had. It was so cute and you could eat as much sushi as you wanted. They just calculated your meal by the amount of plates you consumed. I was stuff and only paid $10 for everything with a drink. 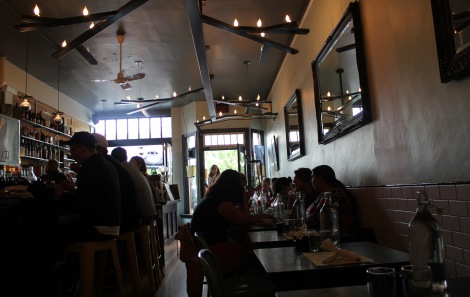 Day 2  for the restaurant list is Broder Nord. It’s a Swedish restaurant with some of the best hash I’ve ever tasted.

We started the day off with drinks. I had a Bellini, but Nicole’s Bloody Mary looked divine. I got the trout hash and it was to die for. I really liked the square eggs on top and even though I’m not a bit fan of beets, I decided early on in the vacation that I was eating everything as is.

We also got these pancake balls and those dipped in lemon curd is absolutely fabulous. I was so stuffed by the end of it, I thought they would have to roll me out.

For dinner on day 2, we went to Queen of Sheba. My previous experience with Ethiopian cuisine in NYC had me a bit wary, but I refused to let one bad experience turn me away from an entire type of food. 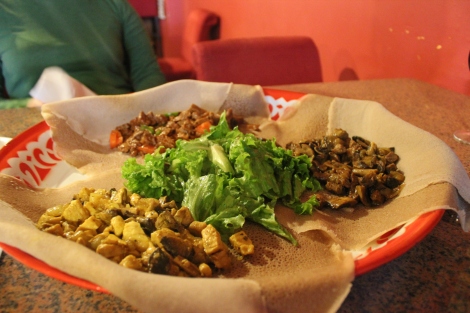 I was pleasantly surprised by how amazing it was. As with most Ethiopian cuisine, it’s served on a large platter on a bread-like item called injera. You eat everything with your hands and it’s all full of flavor. I got the chicken with mushroom, Erin got the same but with beef, and Nicole got the lamb in a spicy sauce. We all shared and they none were unpleasant. My favorite had to be my own though.

After our hike (Day 3) we decided to check out Nong’s Khao Man Gai because they have some of the best chicken and rice in Portland. Not only is it good, it’s also fairly cheap. I got the Chicken & Rice in a Peanut Sauce with a side of soup (broth) and a Mango drink for about $12.

I’ve never tried this combination of food before, but it was pretty amazing. We sat outside and scarfed everything down because we were quite hungry after our hike. After then we binged on cookies and ice cream while watching The Wolf of Wall Street.

Oven & Shaker was a restaurant that me and Erin found on my last full day there (Day 4). This was the day that I selected what we would eat. Turns out it was a pretty good choice. As soon as we walked in, we were greeted by a saloon style restaurant. The smell was absolutely amazing. They make pizzas in wood burning ovens as well as some fabulous drinks.

Erin and I decided to share a pizza. We selected the Wild Fennel Sausage pizza with tomato, smoked mozzarella, potato, mama li’s and we added prosciutto and shiitake mushrooms. For an appetizer we got the Arancini suppli al telefono which is wild mushroom risotto, smoked mozzarella, and tomato ragu. And as a drink I got the Pineapple Trainwreck.

Everything we got was absolutely delicious. The pizza was thin so folding it New York style was necessary. 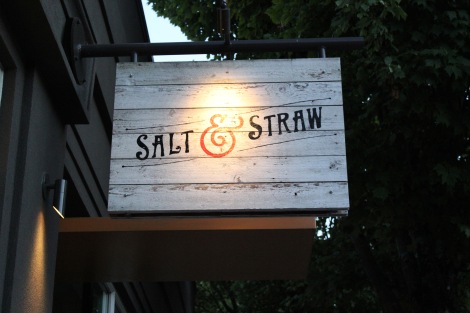 Salt & Straw was on my list of must-go places and I’m happy I was able to get there on day 4. It was completely worth the wait (There is always a line out the door). This ice cream parlor uses local, sustainable, organic ingredients and even create their own waffle cones from scratch right in front of you. They are known for their interesting flavors. I tried their Pear & Blue Cheese, Honey Lavender, and Chocolate Gooey Brownie.

Pear & Blue Cheese: Starts off sweet and ends with a cheesy flavor. It reminds me of a cold cheese board combination with chucks of pears mixed in.

Honey Lavender (full version): It was a light ice cream that was surprisingly well paired. I’ve always been a fan of lavender and this sealed the deal for me.

Chocolate Gooey Brownie: I had to try a more traditional flavor and they pulled it off just as well. There were chucks of brownies mingled in with the chocolate.

Overall, I had an amazing experience and I can’t wait to take my next vacation. I got the traveling bug and it won’t let go.

Thank you all for reading,